Small and mid-cap companies based in the Eurozone have performed well over the last ten years. Based on 2019 estimates, earnings have grown by 250%, compared with 150% for their large cap peers.

The rebound in the Eurozone economy has helped. European economic momentum has been weaker than in the US in 2018 due to their tax reform, but things could even out progressively as this impact moderates and more favourable exchange rates help our continent. European mid-caps are also more domestically focused than their large cap counterparts, so less likely to be hit by foreign exchange risk. The European small and mid-cap market is also extremely broad, allowing the active management Quadrator Fund team to add real value.

‘There are around 2,500 stocks in the universe. The diversity allows us to access pure plays in specific areas, like robotics, that can be diluted by other less attractive divisions in larger corporations. A significant number of stocks have low or no coverage, which create market inefficiencies to exploit,’ says Olivier de Royère who co-manages the fund with Marion Casal.

Maintaining a close relationship with small and mid-cap senior management over long periods of time also helps de Royère and Casal build a strong picture of how each company is performing when analyst research is weak.

Larger stocks may be involved in key themes such as industry 4.0, they say, but the extent and impact on their involvement is often diluted because of the size of the company and its product range. The variety of small and mid-cap stocks also allows the two managers to pivot between growth and value as conditions dictate, sidestepping concerns about macroeconomic headwinds. And smaller stocks are not necessarily as volatile as people think, even in extreme bear markets like 2008.

‘Volatility can be an issue for a few months if too many non-dedicated investors want to exit like we have seen in recent weeks: large cap funds, hedge funds, quant funds but this kind of event most of the times creates bases for rebounds.  On small market corrections, volatility can be lower than for large caps. The impact of economic or external events is often less extreme as long as they look manageable,’ say de Royère and Casal. 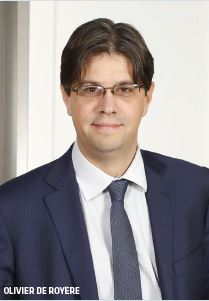 To sort through the huge number of stocks on offer, the Montpensier Finance Quadrator team relies on a proprietary investment process to analyse the small and mid-cap market. The first two criteria are growth potential, based on EPS, EBITDA and revenue growth, and valuation compared to the market and historical valuations through the business cycle. The team also looks at visibility metrics, such as debt coverage, consensus dispersion and volatility. The final criterion is qualitative, based on each company’s business strategy. It also seeks out niche players and distinctive expertise that make a company stand out, or for specific cases of restructuring or M&A targets.

‘The Quadrator process is a strong combination of pure stock picking combined with quantitative methods. It helps us generate potential ideas and makes sure we do not miss major market movements,’ says de Royère.

Montpensier Finance managers also have an Environment Social and Governance overlay, using the MSCI Environmental Intangible Value Asset rankings. Where ESG data is incomplete, if mid-cap disclosures are weak for example, the two managers will make their own assessment.

The Quadrator team also deploys there proprietary in house Montpensier Market Scan that looks at economic momentum by region and country, and monetary policy dynamics. Both help pick up signals of business and consumer confidence, market pricing, consensus and individual stock valuation changes.

‘We don’t have a pre-defined share of the fund allocated on the different criteria in our investment framework, but they help us screening stocks when we want to have more growth or value holdings depending mostly on economic momentum,’ say the two fund managers.

‘The Montpensier Market Scan tool helps us to identify the timing for investing in value or growth stocks or specific regions. The market valuation and earnings growth perspective also enable us to monitor more closely the market exposure of the portfolio,’ they say.

Regional disparities are on the rise after a few years of decrease due to the Italian political crisis. We are slightly overweight on this country that provides lots of stock picking opportunities but have very little exposure to domestic stocks and favour world leaders with broad based exposures. Across the Eurozone, earnings growth 12 M Fwd are now 9,5%, which means that stocks have significantly de-rated given the recent correction, creating opportunities.

The current risk premium on the sector is around 190 basis points higher than its long term average, making it an attractive proposition against other asset classes, most notably fixed income bonds.

Having benefited from the strong run in growth stocks, the managers had reduced their exposure to that category which showed more limited upside. Nevertheless, the case for a value rotation is far less convincing on a bottom up than a topdown approach because some cyclical sectors are close to peak cycle like auto or construction.

The search of non-cyclical value has led to invest in Ebro Foods, the world leader in pasta and rice who has remarkably stable long term financial metrics but suffers from temporary headwinds including the time lag the pass to customers increased rice prices. Generally speaking, some quality companies who suffer from cost increases offer significant upside to patient investors. We can quote the food packaging company Huhtamaki as a good illustration of this. General Industrial companies have de-rated a lot this year on the basis of supply chains bottlenecks, many of which should abate strongly in 2019; some might disappoint on 2018 results and we have done a portfolio review to try and avoid them but others like Wacker Neuson, in which a position has progressively been built, have unjustifiably been dragged down.

De Royere says he and Casal are still keen on animal health provider Virbac, who’s recovery after internal problems and a now lapsed ban by the US Food and Drug Administration is gaining traction as shown by its recent profit upgrade. Margins remain strong in the sector and revenues are growing as owners spend more on their pets. 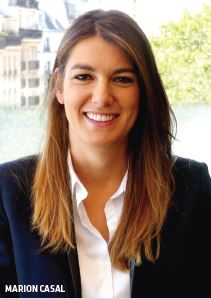 The current flow back in growth stocks can clearly offer opportunities in the coming weeks on structural winners.

As it generally represents a good balance between the economic and financial situation in the northern and southern parts of Europe, the team retains its historical bias towards companies listed in France. The portfolio’s exposure to France is around 43%, an overweight when compared to the EuroStoxx Small benchmark.

‘Geographic exposure comes second to identifying good investment opportunities. Our ability to meet with company management on a regular basis is key in the smaller cap segment that is 15% of the portfolio,’ explains Casal.

The two managers see few investment opportunities in Spain, despite the country’s economic turnaround. There is more potential in Italy, even though the macro picture is weaker, particularly in favoured sectors such as industrials, healthcare, consumer and technology where niche market leaders abound.

Marion Casal and Olivier de Royère are not surprised by in the increases in small and mid-cap volatility levels -although their intensity is affected by algorithmic trading- after the market was almost too calm in 2017. The slow withdrawal of European Central Bank liquidity affects all equity markets, they think, not just those further down the capitalisation scale. Well-run, pro-cyclical stocks should be able to ride out any storms.

‘As usual, it is important to be selective in the small and mid-cap space,’ says Casal.