The time of fragmentations 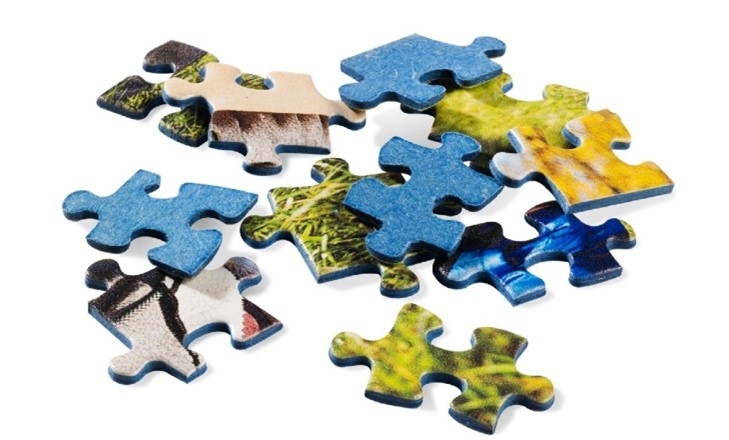 The pandemic is back, and central banks are looking for the right balance, but fragmentation is dominating. To the point of calling into question the announced monetary tightening?

Since the beginning of December, the world has seemed to slip back into the throes of winter 2020. The rapid circulation of the omicron variant has prompted policymakers around the world to once again increase economic restrictions and closures, while accelerating the pace of vaccination campaigns.

The return of the pandemic has disrupted the economic scenarios for the coming year. On 16 December, the ECB revised its estimate of economic growth in 2022 for the euro zone to 4.2%, compared with the 4.6% announced last September. Without making a clear statement on the subject, the Fed, the day before, gave itself “between three and six weeks” to evaluate the impact of the new evolution of the virus on its forecasts.

Our MMS Montpensier Economic Momentum Indicators for the eurozone and the US declined in early autumn and are now stabilising.

Yet, in parallel with this caution on the economic outlook, monetary tightening decisions are multiplying. Central banks now seem to have their eyes on inflation and are looking to rapidly reduce the emergency programmes they have been implementing since March 2020 and the eruption of Covid 19.

On both sides of the Atlantic, they have announced that they are aiming to end their massive “pandemic” purchases in March 2022, in less than three months’ time. The ECB is still putting off the prospect of an interest rate hike – even if the debate within the ECB is becoming more heated – but the Fed is no longer hesitating to raise the subject by the middle of the year. And the Bank of England went further by raising its interest rates by one notch at its meeting on 14 December. 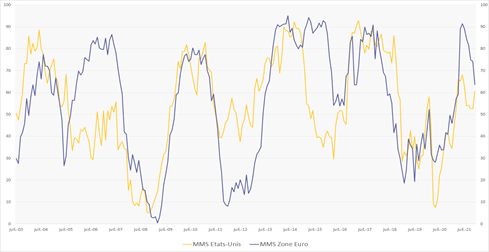 The paradox is only apparent. They are all seeking the right balance between the intense political pressure generated by the loss of purchasing power caused by the accelerated rise in prices in the United States (more than 6% on an annual basis) and in Europe (more than 4% in the euro zone and 5% in the United Kingdom), and the growing economic uncertainties linked to the return of the pandemic.

For the time being, despite the measures announced, monetary policies remain accommodative. Our Montpensier monetary conditions indicator remains well oriented on both sides of the Atlantic, although it has been declining in recent weeks.

And this concern is all the greater given that, even before taking into account the evolution of the health context, the leading inflation indicators are no longer as flamboyant as they were at the end of October: since then, oil has stabilised, logistics costs have corrected from their highs and inflation expectations among purchasing managers are falling.

The second obstacle standing in their way is economic and political fragmentation. After the sacred union of 2020, the trend towards desynchronisation has only increased throughout 2021.

In the United States, the Democrat-Republican divide, already gaping during the presidential election, has grown even more pronounced as vaccine policies have been rolled out. Even economic perceptions are affected by this phenomenon: in Gallup polls conducted in late 2021 on the morale of US citizens, Democrats were overwhelmingly optimistic about the future while Republicans were strongly pessimistic.

In Europe, the fracturing is visible in the inflation figures, which are very strong in Germany and Spain, much less so in Italy and France, as well as in the rates of return to better fortunes after the pandemic: France has already returned to its end-2019 GDP level, while Spain is still far from it.

It is also very noticeable in the financial balances of the Old Continent : the Netherlands has already fallen below 60% of debt to GDP, Germany is approaching 80%, while France and Italy are above 110%. This means that the future “common budgetary rules” will be complex.

Several key factors could support equity markets: earnings growth is still expected to be between +5% and +10% in 2022 after a record year in 2021; the valuation of European markets is very reasonable compared to the level of interest rates and central banks will remain supportive in the coming months.

Without mentioning geopolitical events, the pace of inflation and the spread of the virus remain, of course, the random variables that could lead to increased volatility.

If this were not the case, the markets would be in for a good year. Happy New Year to all!